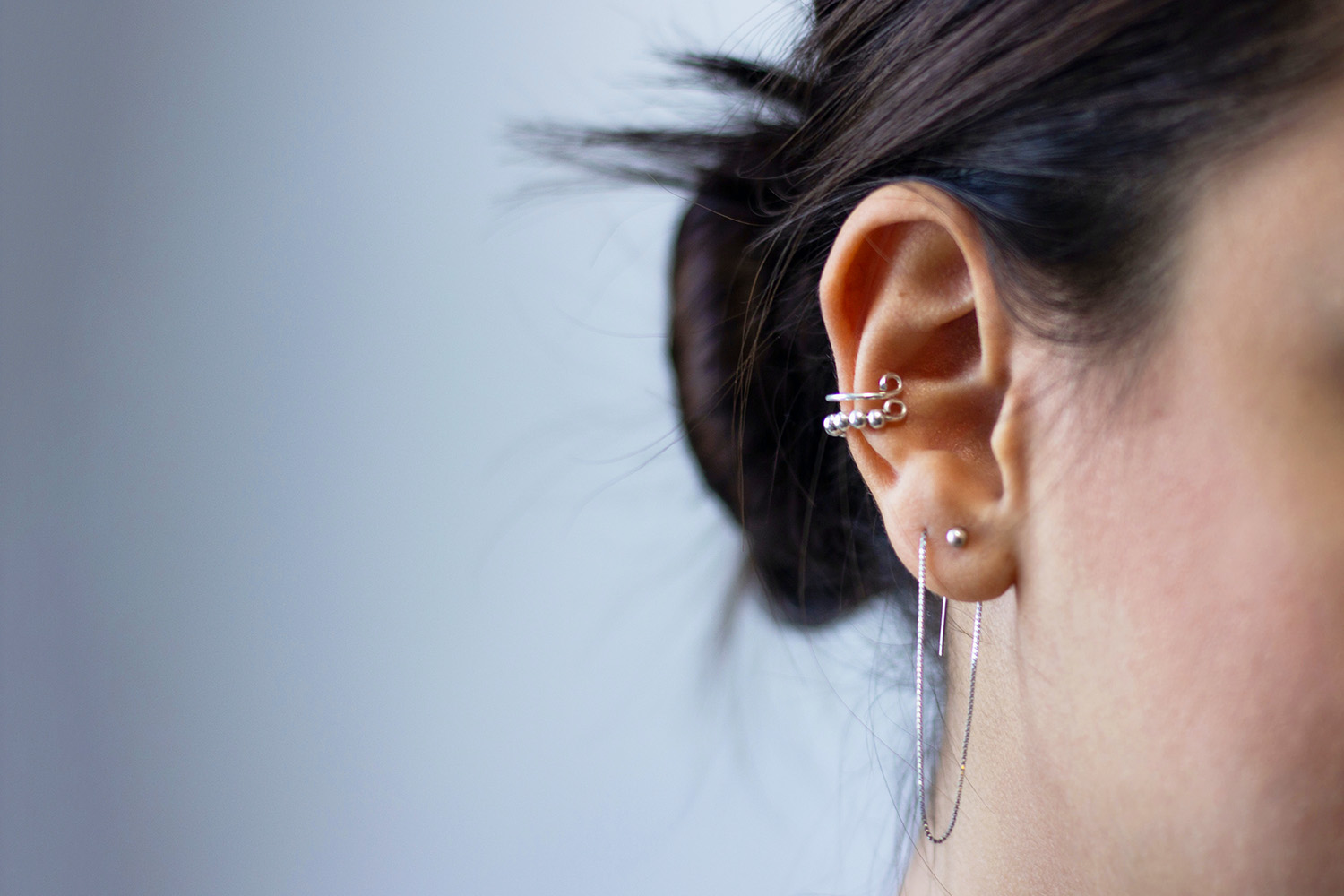 By my early twenties, I had seven holes punched in my body in various places, despite a crippling fear of needles: tongue, navel, nose, and two in each ear. (Word to the wise: Don’t watch someone get their nose pierced before you do. Huge mistake.)

A decade later saw the wilder pieces set aside in prep for a major surgery. I couldn’t for the life of me get my nose ring back in and adorning my bellybutton seemed silly after a while, but the tongue stud was hard to let go of. It was my first non-Claire’s piercing, and removing it felt final, as if I was losing some part of my character, my essential self. Once I took it out, I would no longer be who I was.

But I did it. Even wrote a poem about it. Because of course I did.

Only the four mundane ear holes remain now, although I’m not wearing earrings much anymore (thanks, pandemic).

But I’m thinking of getting another one.

If any of your people—Hebrew men or women—sell themselves to you and serve you six years, in the seventh year you must let them go free. […] But if your servant says to you, “I do not want to leave you,” because he loves you and your family and is well off with you, then take an awl and push it through his earlobe into the door, and he will become your servant for life. (Deut 15:12-17 NIV)

Seven years today. That’s how long I’ve been following Jesus. That’s long it’s been since I went from raising uncertain hands high in Easter worship to weeping flat on my face in the aisle as the Lord of all Creation broke through the last of my defenses, finally allowed to collect me in His mighty, gentle arms and pull me close.

Twenty years of seeking ended in half a second.

But it’s never that easy. Over the past six years, I have wrestled with freedom as God defines it. I was promised that the chains of my flaws and bad choices would fall away but hadn’t been briefed on the chains that would replace them.

I’ve been set free from the bondage of disordered eating, perfectionism, suicidal depression, my parent’s divorce, isolation, poverty mindset, enjoying martyrdom, sexual and emotional adultery, dis-integration. From the power of sin, death, and the grave. From so much more than I can say.

Yet I am now enslaved to the Gospel, to the beautiful truth that no matter how loving, just, careful, generous, outgoing, or pure I am, it isn’t enough to save me (or anyone else). To a lifetime of adoring service to the King who calls me His friend.

They’re wonderful chains, to be sure, but chains still. And this formerly Pagan, free-spirited American struggles with servitude, even if it is the good kind.

Rather than rebel or run away from this paradox, though, I stubbornly buckled down and have put 2,192 days of blood, sweat, and tears (mostly tears) into understanding it the way Paul did:

Don’t you realize that grace frees you to choose your own master? But choose carefully, for you surrender yourself to become a servant—bound to the one you choose to obey. If you choose to love sin, it will become your master, and it will own you and reward you with death. But if you choose to love and obey God, he will lead you into perfect righteousness.

And thanks be to God, for in the past you were servants of sin, but now your obedience is heart deep, and your life is being molded by truth through the teaching you are devoted to. And now you celebrate your freedom from your former master—sin. You’ve left its bondage, and now God’s perfect righteousness holds power over you as his loving servants (Rom 6:16-17 TPT).

It’s a mystery, this delight to be devoted to a master other than myself. It requires changing my definition of freedom from self-sufficiency to total dependency. It makes no sense.

Except that my heart sings to know the One who cares most about me in all of time and space.

Except that I have never felt satisfaction and peace like when I obey Him.

Except that real healing and change has only happened under His care.

Except that love makes no sense to anyone but the lover.

Except that it does.

For the past six years, I have grown to know this new Master to whom I’ve sold out, increasingly invested in His work, drawn in by both tangible and transcendent rewards. And now, standing on the cusp of the seventh, I have a choice to make.

I’m free to go if I wish; I’ve served my time. The year of release even states that the discharged slave is to be richly blessed with wine and sheep, the way God blessed the Israelites on their way out of Egypt (Deut 15:14). I could walk away now without a trace of condemnation, be my own master, do it my way.

But how could I?

How could I turn my back on unconditional love, reconstructive healing, true truth, unmerited favor, sustaining peace, and redefined joy–not to mention the assurance of eternal life? On the protective boundaries and freedom of His service?

As I stand at the gate of my Master’s house looking out into the wide, empty fields of the world beyond, I take a deep breath of air I will never taste again, sweet at first but quickly souring in my lungs as hidden grime and smog burrow in. I put down my suitcase filled with paltry belongings and gaze at the verdant hills, the blue skies, the bustling cities—at what I’m being offered: fading beauty hiding fear and pain. I want to remember.

I don’t turn when the warm, broad hand touches my shoulder. I just smile, lean my ear against the post, and wait.

3 thoughts on “Pierced for love: 7 years of service, a lifetime of devotion”